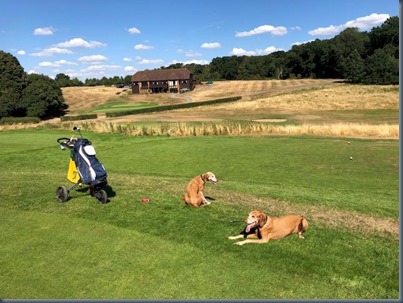 Welcome – The club’s official stance on dogs is that leads are required, but since there was virtually nobody on the course (there had been a club competition earlier during the weekend), the pro shop said we were okay to take them off the lead if we kept them under control and cleaned up after them. Over the course of the round, we did come across a walker with a couple of sweet golden retrievers who enjoyed meeting our girls and having a brief little play.

What was a bit less welcoming were the sand traps littered around like confetti on the Champs Elysees on after the World Cup Final. I think below is how they determined the hazard design for the course…

The 11th and 16th holes have 7 bunkers each. The area covered by the bunkers surrounding the par 3 13th covers more space than the green itself. Are the owners of the club owners of some sand and gravel who just sold off their gravel division? Very dog friendly course, but don’t bring your cat.

Walk – With the wide open spaces, Rusty and Grace enjoyed having a bit of freedom to stretch their legs. And while the fairly pervasive long grass lining the fairways turned out to be a bit of a nuisance for our wayward drives, Rusty enjoyed sniffing around in them and Grace got several treats for finding those balls in the rough.

Water – There are two good sized water hazards on the course in good condition. One by the 17th and one which touches both the 6th and the 16th (so you the dogs can take a drink on both the front and back nine there). The water was in surprisingly fresh condition given the dry conditions.

Wildlife – Not much visible except for flocks of gulls loitering on the fairway and a bit nonplussed by balls whizzing by them. As the sun set, we did hear the plaintive (and frankly bit distressing) crepuscular serenade of a libidinous monk jack.

Wind Down – Squeezing out the last bit of summer sun, we didn’t get off the course until about 9:30 pm when all the pubs in the area had stopped serving food. DoggiePubs recommended The Packhorse which is just round the corner from the course and our golf partners said she her bridge club played there periodically and it is a very nice establishment. 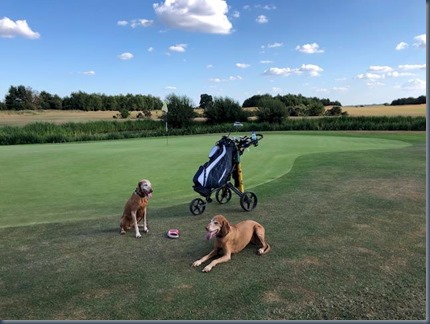