Welcome – At the outset we thought that the girls might be a bit out of place at West Essex as a member came up to us at the pro shop and commented on them saying “Well, that a first” (ie. first time seeing someone golf with their dogs). They were quite welcoming and were bemused by our accounts of Grace’s ball finding abilities in the rough. But any concerns were especially allayed when we stopped at the 9th hole for some extra hydration. Half a dozen members came up to say hi to the pair and comment on how handsome they looked and how well behaved they were.

Walk – I never realized that greater London was so hilly. The first few holes seem as vertical as they are horizontal. Things flatten out mid-course until the rollercoaster starts again towards the end culminating in a crampon-optional summit at the 18th. One dividend of the nose-bleed elevation are some cracking views of the London skyline in the distance.

Water – Two big water features by the 11th/14th and 10th provide an opportunity for a sip, but also quite a few brooklets run through the course most of which were still flowing with water even with our late August play. The 9th does circle back to the club house (and halfway hut) so you do get a chance for a refreshment fueled respite.

Wildlife – The wildlife was quite limited. Even the waterfowl on the pond by hole 14 were just decoration models.

Wind Down – It is even harder to find a pub serving dinner on a bank holiday Monday than it is on a midday roast-oriented Sunday. But after calling half a dozen doggie pubs in the area (of course, from DoggiePubs.org.uk), we finally found the The Woodbine in Waltham Abbey on the edge of both Epping Forrest and the M25. Its description there (“Country pub with cask ales, dog friendly and good food”) sort of under-sells it as dos its first impressions. Cosmetically, the pub is a bit tattered with quite a bit of clutter and a hodgepodge of décor. But, when it comes to the fundamentals – food, entertainment, refreshment and beer – it really excels. They seem to have some form of entertainment from jazz singing to psychic readings every night. Their broad array of craft beers was only exceeded by the longest list of ciders and perries I’ve come across at a pub (and the bar had a few dozen varieties of gin to boot). I wouldn’t quite call the food “gastro” as the dishes weren’t especially inventive or trendy. I would call it exceptionally well-prepared pub grub. Probably the best hog roast sandwich (on brioche roll packed with pork, sage stuffing and bramley apple). Lori was delighted to find poblano peppers on the starters menu. But Rusty and Grace were especially appreciative of the extra-attentive service including dog biscuits and a fresh bowl of water brought to the table. 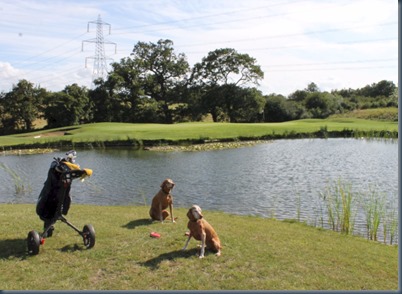 Welcome – Magnolia Park is very happy to have dogs as long as they are kept on a lead (two people mentioned to us that they were welcome when we arrived).

Walk – Back on the Oxford Plain, the walk is leisurely flat. But what it lacks in elevation Magnolia Park adds in distance. A nearly 7k course that the club recommends 4.5 hours to play. The round includes 4 par 5s including topping and tailing your day on the 1st and 18th. And 6 of the par 4s are over 400 yards. Chivalrously, the red ties are set 50-100 yards ahead (in fact the red tie round is a half kilometer shorter in length).

Water – Part of being on the low lying plain (versus our more local Chiltern Hills) is that water settles. So Magnolia Park was had plenty of water all around with a couple of small ponds, a couple of big ones and a number of streams. They were not all major hazards as only the 2nd and 15th both had green obstructing ponds. The two massive lakes flanked alongside the 1st and 18th fairways only cause problems for the most extreme of draws or slices. The hazard in front of hole 2 had steep wooden sides making it inaccessible for a sip by the dogs (as well as a bit dangerous being hard to get out if a creature fell in), but the others all had access points. The course doesn’t return to the clubhouse until the 15th hole, but there is a halfway hut at the 11th with water.

Wildlife – Quite minimal and surprisingly little water fowl in the expansive water features.

Wind Down – The Pointer might just be the finest dog friendly pub we have ever visited. It is beyond “gastro” and really more “gourmet” eaterie. And yet its fancy fare doesn’t preclude including your best friend. In fact, dogs are welcome throughout the expansive establishment in either the back garden, pub lounge or dining room(s). Obligatory biscuits and water bowl. Many of the guests were asking about them and reaching out to give them the attention and stroking they adore. But what was one of the most dog-friendly gestures we have ever experienced is that when one of the servers was clearing another table, they passed by our table and asked if our dogs would like the steak scraps that the diners had left on their plate (Grace: “Yes, please!!”). 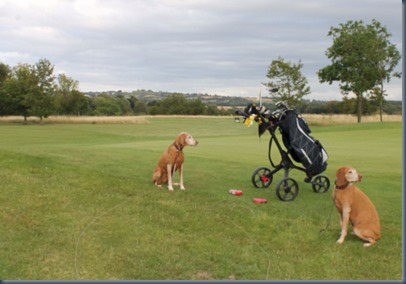 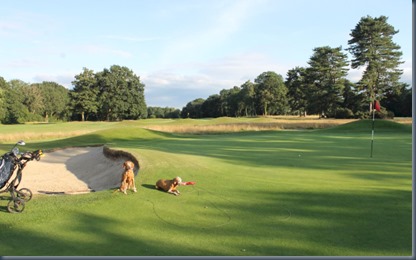 Welcome – The course is quite restricted in its welcome to canine companions limiting them to weekday evenings after 5:00 pm. Even with a relatively late summer’s sundown, it’s tough to get a full 18 before dark (though the club does offer a very attractive twilight green fee of £29). Still, everyone we bumped into fussed enthusiastically over Rusty and Grace (which they quite enjoyed).

Walk – The course meanders through an entirely flat Thames Valley landscape. While the variety of trees and greenery are pleasing to the eye, the profusion of obstacle from hillocks, bunkers, shrubs and anything else the designer could think of throwing in the path of your approach can be a bit more confounding. That said, for the longer holes, the fairways were groomed as neatly as some greens as other courses.

Water – The course doesn’t have any bodies of water on the course, but there is a fountain at the 7th and the 11th finishes back at the clubhouse for any water pitstops required.

Wind Down – Rather than turning to our trusty DoggiePubs.org.uk, being relatively close to home we knew just the place for a post-round wind down in Sonning – The Coppa Club. Tasty food and very dog friendly (they have dog biscuits, watering bowls AND blanket at the door as you come in). The place is spacious with a huge riverside garden so there is plenty of room for the girls to settle down on their beds (or one of the landlord’s blankets provided). When we arrived, there were lots of dogs around including another (but much younger) pair of Vizslas. The biggest bonus, after playing a late day round in the later hours of a summer’s evening, is that the kitchen serves till quite late. The only problem is that the restaurant is very big (which does make it easier to get a table) and very popular (which means that you should still book to be safe). The combination of these two things plus a limited car park means that it is always hard to find a space at the pub itself. Furthermore, Sonning is a nightmare to park in with no nearby public car parks and very limited street parking (with lots of irritable residents who are happy to get you towed if your parking strays at all from authorized places). 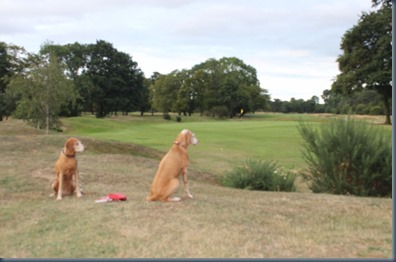 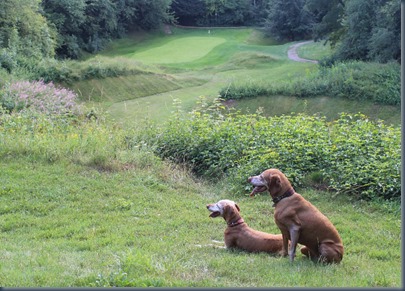 Welcome – As soon as we arrived at Chesham and Ley Hill a few members generously commended Rusty and Grace for looking so winsome. The course is set on parkland whose covenant allows dog walkers to roam freely off-lead. We not only came across other dog walkers, but also another dog golfer with a very attentive golden retriever.

Walk – The 9 hole course is transected by 3 small but busy country roads. You have to cross them a number of times to get to the next hole. So even though the course does not require leads, you might want to have them on hand to help cross the traffic safely or to provide a bit of extra control on holes that run close to the course and you want to be extra careful about your canine caddy straying onto them.

Water – No water hazards to refresh at, but there’s not really much of a need. There’s a handy water tap outside club on the back side to fill the bottles with. And the 5th tee is right next to the clubhouse so if you run out that quickly, you can refill easily.

Wildlife – The lack of bodies of water and the fairly built up suburban surroundings meant fairly little wildlife to distract or tempt the girls.

Wind Down – The White Hart Inn in Chesham was effusively welcoming to the girls and featured an enclosed beer garden out back which was a great place to dine in the warm summer’s evening and gave them a bit of freedom to wander about without worrying that they would stray somewhere. The food was first rate gastropub quality (the parsnip soup was especially tasty). 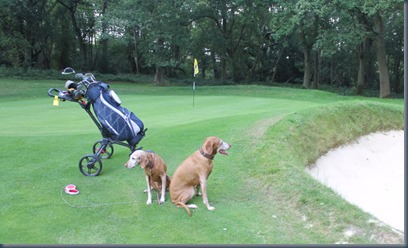