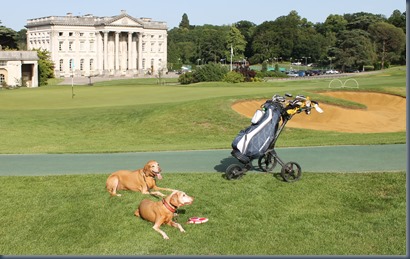 Welcome – Despite the proud traditions in the sport and the evangelical efforts of this website, golfing with your dog remains a bit of anomaly even at the most dog-friendly courses. We are always a bit wary of how the “welcome” will compare with the protocol. The club policy might say “dogs welcome”, but you wonder if the members are really on board. Well, one thing that influences the culture of a place is the tone and example set at the top. So it was especially reassuring when upon arriving at Moor Park we met by happenstance the Chairman of the club, David, with his own best friend, George, which he brings out with him for a round from time to time (see photo directly below).

Water – No water hazards or water supplies on the course (the West Course, the other High Course does have some), but the layout of the holes that meant there a many opportunities to peel off to the manor home in a pinch. Hole 9 arrives back at the main facility (and also has its own halfway house right on the course). But also the 12th, 13th and 15th holes all finish close to the clubhouse (for the West course). The lack of water hazards seemed to be compensated for by added bunkers instead. On Hole 3, we faced a gauntlet of 4 sand traps lined up one after the other approaching the hole. And the Hole 9 had more sand than green around the hole. One perverse curiosity was that many of the bunkers were carved into a sort of post-ironic heart-shape (see photos below) despite their ubiquity being anything but sweet or endearing.

Walk – We played the West Course which is a bit less pricey (£50 twilight green fee versus £75 for the High Course) and a bit more relaxed for recreational players like ourselves. The number of holes – ie. 9, 12, 13, 15 and of course 18 – that finish close to the main facility (eg. manor home, club house, tennis courts, practice pitches, car pack) provide great flexibility in finishing or breaking up your round. We were running out of time before the kitchen closed so we stopped at the 15th. The grounds themselves are on fairly level topology; however a few greens were perched up on elevated precipices adding an arduous uphill climb to a missed chip shot rolling off the other side of the green.

Wildlife – SQUIRREL! No water hazards meant no water fowl, but the plentiful wooded hills meant lots of squirrels which provided constant distraction to Rusty and Grace (and appreciative of the on-lead policy of the course to help keep their enthusiasm contained).

Wind Down – Once again, we were constrained by serving times. Most of the kitchens at doggie pubs in the area shut at 8:30 pm. Being in the week with the longest days of the year, we want to use of every bit of sunshine. Moor House’s own restaurant also shut at 8:30 pm, but at least we could save the precious minutes of packing up the car and driving to the pub. The setting was spectacular perched on the veranda of this grand Palladian edifice watch the sun finally set on the long summer day. The dogs were settled comfortably on their beds outdoors (not allowed indoors though to note for more inclement days) while we tucked in. Unfortunately, the food didn’t quite match up to the grandeur of the locale. Fairly pedestrian pub-grub made for a somewhat incongruous 3-star meal in this 5-star venue. No complaints though as you can get fancy food anywhere, but moments in settings like these are rare treats indeed. 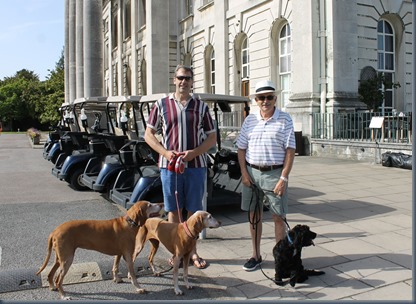 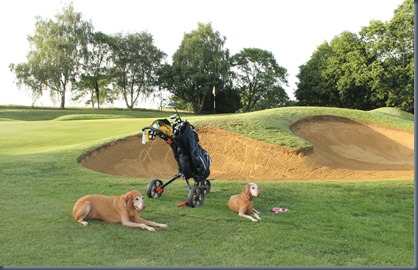 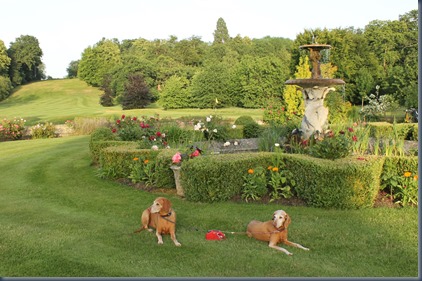