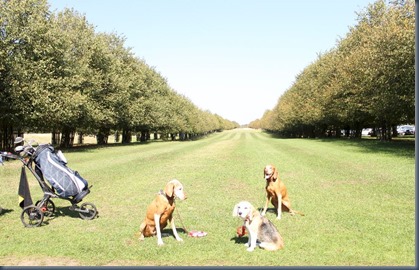 Welcome – Hampton Court Golf Club gave us perhaps the warmest dog golfing welcome we’ve ever had. We were greeted at the clubhouse by members with their own dogs (including an adorable and dachshund/corgi mix who was especially friendly when my sausage bap came out). We found ourselves surrounded on the course by a considerable number of dog walkers who have access to the grounds. But the best welcome of all was by a resident veteran golf Beagle, Poppy (see photo top). We had taken a bacon buttie break after the ninth, but being a weekend morning the course was quite packed and slotting into the back nine was going to be a bit of a challenge. Until Poppy (and her master Khalil) came by in her own two ball and invited us to join them. We formed a very affable foursome where Khalil was able to share lots of insights and background about the course (eg. the course was previously known as “Home Park” until some Americans with more marketing hype took it over). It was the first golfing dog friends we have made since friends of ours first introduced us to dog golfing.

Wildlife – Deery me! What wildlife! The round was also distinguished by having by far the most chock-full collection of fauna. The usual little critters like squirrels and geese, but the main event was the roving herds of deer. A pack of a dozen or so resting in the rough on nearly every other hole (see photos below). Apologies (or “you’re welcome”) for the record number of pictures, but it really did feel like “Mutual of Omaha’s Wild Kingdom”…or perhaps more currently “Walking With Dino-Deers” because these stags were gigantic. The size of horses. But they seemed utterly content to just lie there with golf balls whizzing past them. And even dogs walking by. They didn’t seem to mind when Rusty and Grace passed within feet of them (see photos below). If you ventured closer than 20 feet, they did start to get alert and one would stand up so we tried to keep our distance beyond that. The course attendant passed by and was happy to see the dogs but did reiterate the importance of keeping them on a lead. He said if a dog does decide to approach them, then they get up and start stampeding and there is no stopping them (“Fenton!…Fenton!!…Jesus Christ…Fenton!”). And despite how biddable Rusty and Grace are, we were happy to have them on lead because I’m not sure that Rusty would be able to resist an unwelcome friendly greeting to these curious creatures.

Walk – After what seems like an eternity of hiking rolling hills, Hampton Court was a treat in its table-like flat terrain throughout.

Water – The course is flanked by a couple of bodies of water, but neither are easily accessible. The “Rick Pond” across the boulevard leading to the palace as well as a good size pond flanking the 5th hole. There is a water fountain by the 2nd hole which you can also hit when you return to the 9th tee.

Wind Down – Turning once again to the handy DoggiePubs.org which provides reviewed dog-friendly pubs in order of proximity to target location. So we plugged in the “KT1 4AD” postcode for the Hampton Court Golf Club and up popped The Albany a mere “0.6 miles” away. A literally, even at my age a stone throw (or at least a pitching iron strike) from the 5th hole itself. Well, it is true that the Albany is virtually next door to the golf club…but only if you scale a brick wall and swim across the Thames (see map below). The driving distance is 3.5 miles. Still, you need to drive most of that just to get out of the expansive Hampton Court grounds. The establishment is a stunning riverside eatery virtually on top of the Thames. The food was tasty, but unfortunately the service woefully understaffed (two people managing both the drinks and the food orders at the bar meant an incessant scrum like last orders at a Balham bar). Still, sitting Thames-side on such a lovely day with plenty of room (the lower seating area even has some grassy areas which are a bit of a softer place to settle for the dogs) made the waiting more tolerable. 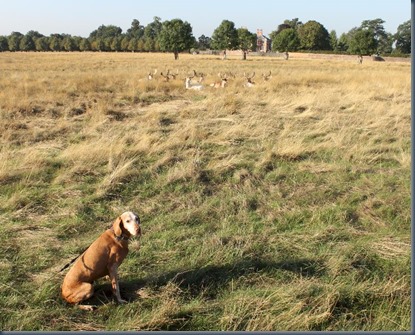 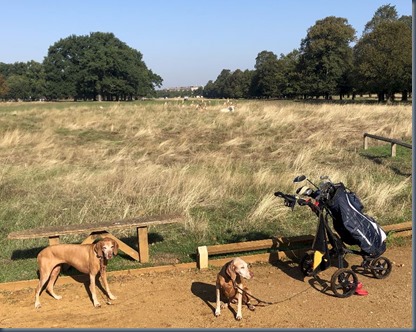 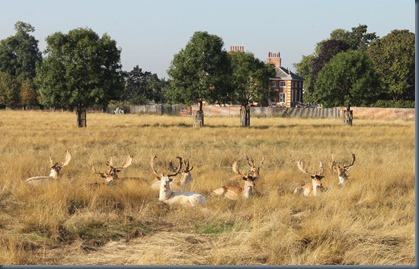 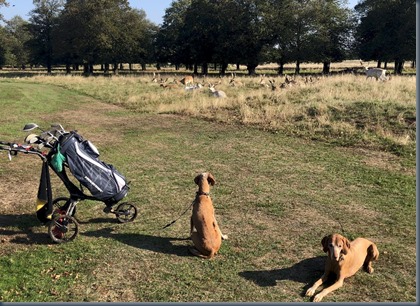 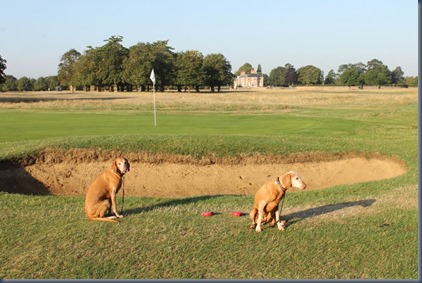 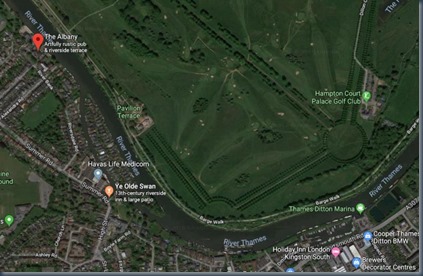