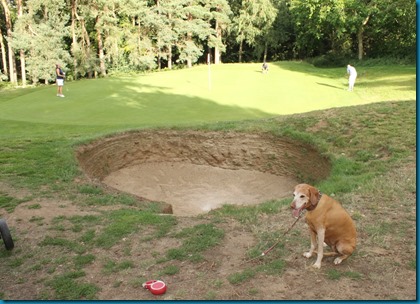 Welcome – Our visit up country to The Millbrook started most auspiciously being greeted by golfing dog Louie (in photo below with his human). And at the end of the round, when we were the last few people coming off the course we saw the most bizarre and fun thing with someone (must have been a staffer) “walking” their quite spirited Weimaraner by following him in a golf cart as he tore down the walking path. Pure doggie joy.

As is the norm during these days of post-lockdown golfing fever, parties got a bit compressed and we ended up bumping up with another two-ball including club member Jason who was wonderfully engaging and so we ended up joining with them for the back nine.

Walk – Most hilly courses have one uphill hole followed by one downhill hole. But in the UK’s own version of Canyonlands National Park, this one crams the whole up and down thing into single holes. The Millbrook hits you with its vertical eccentricity right out of the gate with a 1st hole that you wouldn’t believe you were playing properly if the pro shop didn’t set you off saying “now let me tell you about the first hole…” The “fairway” is just a gaping chasm of heathland. The climbs out of these pits of despair are so deep that they have switchbacks. The Grand Canyon “Rim to Rim” race is arguably the most challenging ultra-endurance race in the world (9 miles down and 9 miles up), and these holes are like mini Rim-to-Rim challenges. Then the course designer thought “I wonder if I can make dog-legs at as steep an angle as these fairways?” The course may be dog-friendly, but the dog-legs on the 1st and 13th were decidedly golfer-unfriendly with their virtual acute angles.

The bunkers would seem a trivial concern when your entire fairway is one expanse of sunken earth, but they didn’t scrimp on sadism with the sand traps. Someone at the club must have found one of those tunnel-boring machines and contrived a way to dig holes straight down. Figuring out that it would take too long to dig all the way to China, they stopped halfway, tossed in a load of sand and said “good luck” folks (see photo at top).

And just to add to the quirkiness of the course, 3 of the greens are shared between front nine and back nine holes. These shared greens are huge, but still a strange sight to see four folks on the putting green at one time.

Water – The course features a sizeable aqueous hazard that requires traversing on both the 6th and 7th hole. As inaccessible as it seemed to make the greens, the water was easily accessed for a hot day’s drink by Grace.

Wildlife – The small lake in the middle is home to a range of water fowl, but the best bird mega-ticked in the course was my first ever Eagle. And I found it on a particularly challenging example of The Millbrook’s signature topography – hole 9 – where you have to drive across the Valley of Doom onto a North Slope of Despair. But it landed about 30 feet from the green and I followed with one of those eye rubbing shots – a 40 foot chip shot that dribbled into the cup (see photo at bottom).

Wind-Down – Facing the double challenge of finding a pub in the Milton Keynes area and finding a pub open into the evening on a Sunday, we simply opted for our refreshment at the clubhouse bar. They serve a range of food (which we weren’t hungry enough for) as well as drinks you can eat and drink at one of two outdoor areas (which do include a water bowl for the pups). 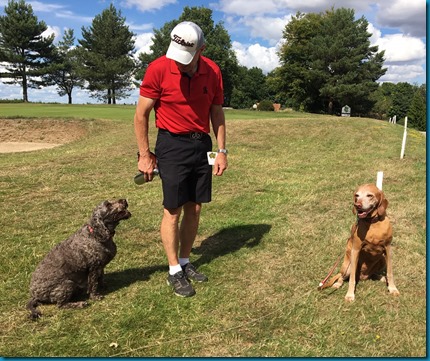 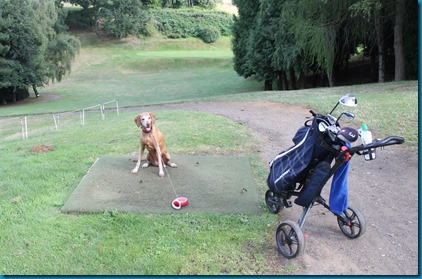 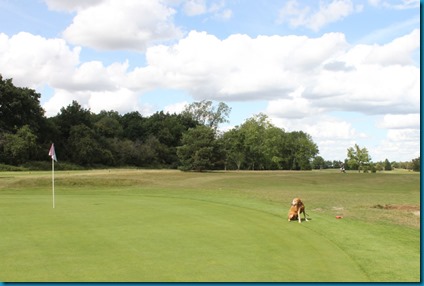 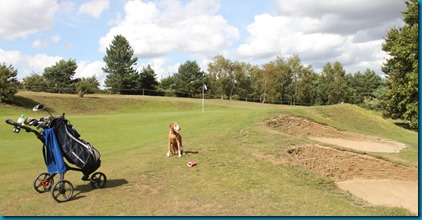 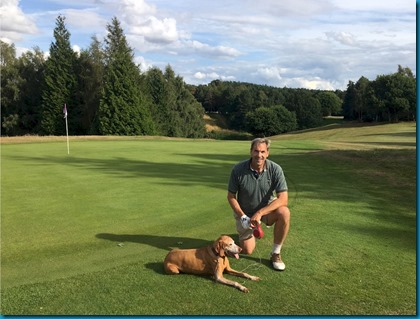 […] – Another very four-legged-friendly course with equally friendly two-legged members at Banstead Downs. This day, the crowded course brought member Paul, out on a singleton round, into […]