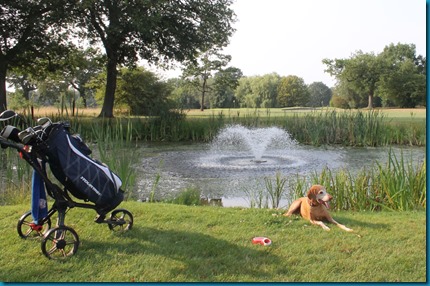 Welcome – Admittedly, we were rolling the dice to play this day. The forecasts had called for “thundershowers” all week, but on the day of, it said showers in the morning and mostly sunny all day. We booked a late afternoon round. Curiously and considerately, the course called us shortly after to say that their forecasts had called for showers later in the day and so they wanted to confirm that we wanted to play and if we did they would provide a discount to our round. I thought that was all very kind and welcome, but the clouds were parting and we thought we were going to be on the winning side of this bet. On the second hole, we did get a passing “little black rain cloud” that sprinkled on us (you know, a rain cloud directly above and blue sky every where else). But other than that, the day just got better. When we stopped for some refreshment at the 9th hole, the skies above were 100% clear. We were musing about how we might do some stargazing that evening, but

Water – In the end, maybe a bit too much water this round. As we proceeded on the back nine, the skies did get cloudier and cloudier until the heavens opened completely on the 17th. With a fair hike to the car park, we were completely soaked by the time we arrived. At least we earned our discount.

Not just water falling from the clouds, but also considerable amounts from water fountains. The path to the 1st tee featured a drinking fountain (obviously disabled for COVID19 protocol) and more than one of the several water features included a spouting fountain in the center.

Ponds at the 5th, 8th, 17th and 18th all brimming from recent showers made for very accessible drinks and dips for Grace. Unfortunately, I had my own Jean van de Velde Carnoustie moment on the 5th when I insisted on using a pitching wedge to get over the pond with a lie on a downward slope when I should have (and eventually did) used a loft wedge.

Walk – Aside from the top and tail (1st and 2nd, and then the 17th and 18th) of a big drop hole followed by a big climb hole), the course was a pretty level. We often ask when we check in whether the course returns to the clubhouse at the 9th which allows us to restock on water (or use the facilities to dispose of some water ingested). Some courses set off and never return until the final hole, but Brickendon circles back at the 6th, 9th, 12th and of course the 18th. Not only does this layout make facilities accessible, but it also make the course one of the most scalable that we have come across. That is to say that if you don’t feel up to a full 18, you can play 6, 9, 12 or even 14 holes (as it is easy to clip the 15th and 16th by going from the 14th green to the 17th tee).

Wildlife – Squirrel! Saw quite a few scampering squirrels including one who boldly crept up to the terrace where we were enjoying a mid-round drink. Obviously, conditioned that dining patrons might drop or share some of their nibbles, but instead of crumbs from the table, Mr. Furry Rodent discovered Grace sitting there staking her claim to anything falling from the table. After a moment’s surprised hesitation, the squirrel decide to volte face to more inviting areas.

Wind Down – Apres la deluge…Just down the road from Essendon I had found Bakers Arms at the top of the Doggie Pubs in the area, but its website’s booking didn’t work properly so I skipped it and moved on to the next one (customer service rookie error). Back in the neighbourhood and the establishment even closer to Brickendon Grange, I decided to pick up the telephone and call for a booking which worked fine. Their service was impeccable as they brought towels out for us to remove water and brought out a drinking bowl for Grace for her to fill up on water. The food was tasty and the warm, homey atmosphere lifted our drenched spirits. 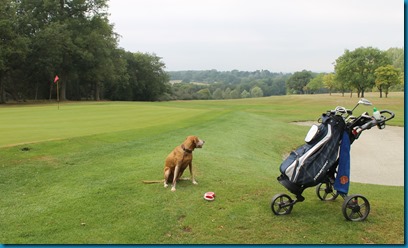 Thank you for the review, we are happy to allow dogs on a lead at Brickendon Grange Golf Club. We find it hard to believe that more golf clubs don’t allow “Mans’ Best Friend”, so long as they are controlled by their owners
Please come again