Welcome – I don’t know if there is a more dog-friendly course around, but I’m sure you’d struggle to find a more animal-friendly course anywhere than New Forest. Four-legged creatures freely grazing far outnumber the mere iron-toting bipeds. The myriad of dog-walkers crisscrossing the area were the least of the animal kingdom represented. The video above provides a bit of a flavour of the farmyard experience – horses on the green (though pretty much always on the fringes as the green itself simply doesn’t have long enough grass to nibble). All of the herd seems pretty non-plussed by the golfers passing by.

Walk – On the courses, New “Forest” is a bit of a misnomer given how few trees there on the course itself. New “Prairie” is a bit more like apropos with its general flat topology and especially with the herds of wild horses, cattle and deer roaming all day. While the fairways are mostly wide open, there are plenty of trees on the fringes to provide shade at most of tees and greens.

Water – No really natural sources on the course and no return to clubhouse.  The course map shows a small stream in the middle of the course (touching holes 9, 1, 15, 16, and 17) as well as a water hazard between 11 and 12, but they were all pretty desiccated.  So fill your canteens before setting out.

Wind Down – One of our catalysts to coming down to the south coast was to visit some dear friends we have not seen for some time. As a result, our wind down was a BBQ in their sumptuously manicured garden. The course itself was open and serving beers and other refreshments which would have otherwise tempted us had we not been anxious to join our friends. 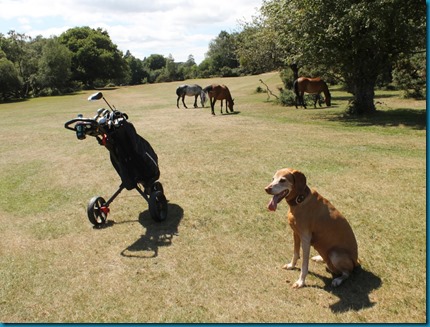 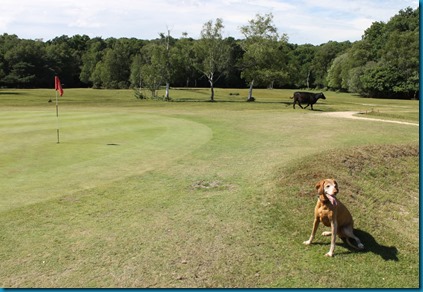 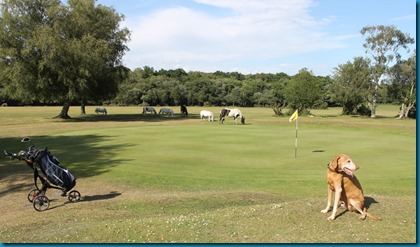 […] – Our New Forest get-away weekend took us to Bramshaw the following day. They have two 18 hole courses. The Manor Course is […]

[…] Molson beer fest at a moose ranch (see photo below). Geese are to D&S what ponies are to the New Forest. At times it seemed that either we were being stalked by a flock of them, or else each hole had its […]