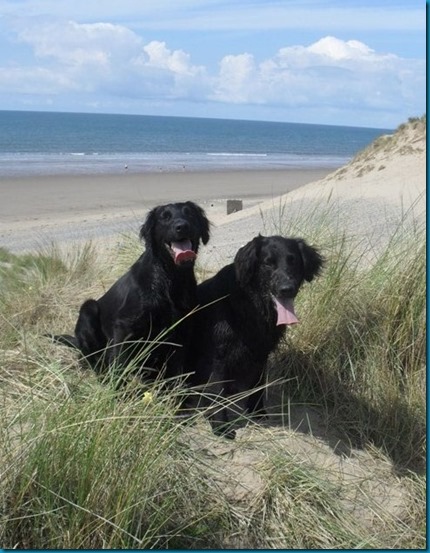 Dog Golf UK’s first guest post and a particularly notable one at that. A new friend of dog golfing, Adam Ruck (photo t bottom), who we met at Shrivenham Park by serendipity, Adam is one of the seminal chroniclers of dog golfing with a high profile piece he wrote for the Telegraph titled “Courses that Welcome Dogs”. We’ve shared a number of notes and he has very generously volunteered to provide a particularly delightful post of our first Welsh course covered:

When I learnt from this excellent site that Wales is among the least dog-friendly golfing corners of what for the moment, however inappropriately, we still call the United Kingdom, I felt an extra surge of pride in the lovely course – and excellent club – that have grown from a string of holes my great grandfather implanted at Aberdovey in the mid-1880s, using a set of nine flower pots acquired from Mrs Timber Jones.

Aberdovey is a colourful little resort that sits with its toes in the sand on the sunny side of the Dovey estuary, half way up the coast of Cardigan Bay. A friendly green wall of hills shelters the village from cold winds. It was this mild climate and the poor health of a family member that brought my great great grandparents from their home near Machynlleth, all of 9 miles upstream, to winter quarters on the coast. Great grandfather brought his young family to reside with them for the 3 month duration of his winter leave from an army posting at Formby, where he had taken up golf.

He brought his clubs with him and, when the mood took him to spend less time with his family, carried them through the village to the open ground beyond the station, a strip of marshy ground between the railway line and a chain of mountainous dunes thrown up by the west wind and the Irish Sea.

Now drained, this gorgeous links boasts the finest greens in the Principality and bunker sand so soft you could fill an egg timer with it. As a playground it has given as much pleasure to our dogs as to me, and considerably less anguish. Admittedly, the round is beset with temptation in the form of the ever-present smell and sound of the sea, so close and yet out of bounds; not to mention the tantalising stream of dogs that cross our path on their way to the beach, pulling bearers of cricket bats, kites and surfboards in their wake.

My dogs are not alone in sensing and on occasion succumbing to the call of the sea. Only last month, on a warm Sunday evening when the course was empty but for an agonisingly slow four-ball in front of us, a friend and I stripped off beside the 12th green, ran down to the beach and into the waves. We soon caught up with the four-ball again, my friend in bare feet and I missing one sock, a seagull having made off with it. Aberdovey is a holiday course and looks kindly on such irregularities of turn-out; at least, in August it does.

Among the local friends and visiting relations with whom Arthur Ruck shared his sport on the common was his brother Richard, who became a much better golfer and took over as the prime mover of Aberdovey golf, designing the first 18 hole course and founding both the club and the Welsh Golfing Union. Another who caught the golf virus was Arthur’s close friend and brother in law Frank Darwin (son of Charles), who passed it on, along with a lifetime attachment to Aberdovey, to his son Bernard. This Darwin grew into a golfer of high quality and a writer of equal distinction, in fact the GOAT among golf writers and a rare sports journalist who took part in many of the events he was reporting on (several Amateur Championships and the 1922 Walker Cup in New York).

Bernard Darwin’s Aberdovey stories are many and colourful. Golfing antiquarians and the collectors who bring their hickories to Aberdovey for an annual match against the club all know the ‘mere schoolmaster’ who achieved the heroic feat of slicing his tee shot onto the railway at eight of the first nine holes (the layout of the course was a little different then). Then there’s Mrs Evans and her ‘biltong’ lunches …. and the caddie with Ovid in his pocket …. and the greenside bunker with its castellated rampart. My favourite is the nameless member who dug a trench across the fairway to commemorate his longest drive. I do hope he was an ancestor of mine.

But it is the story of Mrs Timber Jones that has brought immortality to my great grandfather. When I telephoned the secretary of nearby Royal St David’s to book a tee time recently, he asked if I would be bringing any flower pots with me.

At 6100 yards, Aberdovey is not a long course, and that is part of its charm. A proud moment in the club’s history is celebrated in an essay Darwin wrote for The Times in January 1933, entitled The Great Revulsion. After the great James Braid had been brought in to lengthen the course and sharpen its teeth in preparation for some important championship, the members rose up and voted to change it back again. A similar mistake was made a few years ago, when an ambitious incoming manager commissioned a new set of even-further-back tees. Monthly competitions were held, using the so-called ‘Darwin Tees’, but nobody entered. The tees are overgrown now, and not missed, unlike the cows that kept us company until the club reached deep into its pocket to pay off the local farmers. I miss them, anyway.

The layout might be described as an old-fashioned ‘out and back’, but it is not quite that simple: the course performs an 90 degree turn to the right through the opening holes as it swings around the point where estuary meets open sea, before following the beach north for a mile towards Towyn; and turns left on the way home. And there are zigs and zags where short holes cross the course. In his ‘A Round of Golf Courses’, Patric Dickinson likens it to ‘a badly tied bow tie, with the knot at the 3rd and 16th holes, like Scylla and Charybdis waiting to shipwreck golfers.’

The 3rd is the once-infamous Cader, a blind short hole with a sandhill to clear, named after southern Snowdonia’s presiding mountain. Seventy years ago, Dickinson could still call this hole a ‘hideous Caliban of a creature’ but since then Cader has seen its teeth blunted. The wind and the hacking of furious golfers have taken their toll on the mountainous dune. The cavernous waste bunker that devoured weak tee shots has become a grassy bank, and the green is now a generous crater.

The 16th, by contrast, hides nothing and has lost none of its charm. The railway’s curve, shaped like a perfect draw, intrudes on the direct line from tee to green. It makes a fascinating short par 4, tempting the tiger with the idea of an eagle, or better; while the voice of experience advises an iron shot to the fairway and a precise approach to the most complex of Aberdovey’s greens, ingeniously designed to repel.

Darwin selected the 16th as Aberdovey’s contribution to his cigarette-card ‘perfect round’ of favourite holes from around the country. Others might pick the short 12th with its raised green commanding an end to end view of Cardigan Bay, from Bardsey to St David’s. Now that Aberdovey has abandoned its high tees at 13 and 14 – more’s the pity – this is the only place on the course where the golfer can pause to look down on the sea, as described. If you find a stray white sock up there, it’s mine.

Enough of the course. Play it, enjoy, and marvel at the value of its modest green fee. Why not make a 27-hole day of it? Holes 1 to 5 and 15 to 18 make a terrific 9-hole loop; stronger, some would argue, than the full 18. Dogs are welcome except on competition days, and Aberdovey requests that they be kept on the lead. That might be advisable anyway, if yours is a water-loving dog or one that loves digging in the dunes and racing crazy circles on the beach (don’t they all?). Otherwise you may spend more time searching for a lost dog than trampling the rough for your ball.

19th hole. At the golf club, Gareth pulls an excellent pint of Gaslyn ale, brewed in Portmadoc by Purple Moose; dog bowl and water tap on the hard standing below. The kitchen does a nice line in toasties as well as more sophisticated fuel, and there are evocative old photos to admire, alongside cabinets full of silverware and my great grandfather’s clubs. Pole position in the village is the balcony of The Britannia’s Look-Out Bar. Look out for the brass of Birmingham, showing off its 4x4s and jetskis.

Dormy Houses. The golfer’s hotel and a time-honoured family favourite is The Trefeddian (www.trefwales.com), which looks down on the third and 16th greens and beyond them the shining ocean. Dogs are welcome here and at Yr Hen Stablau (www.selfcateringcottagewales.co.uk) a 3-bedroom cottage in the grounds at Pantlludw, the house near Machynlleth where Bernard Darwin spent summer holidays with his grandmother, practising his swing under the yew tree on rainy days. 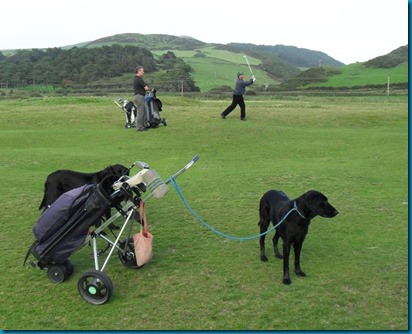 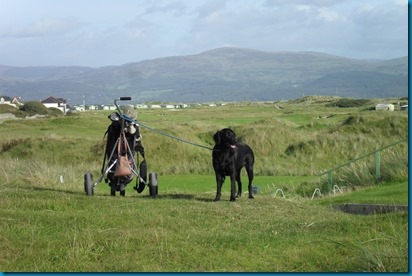 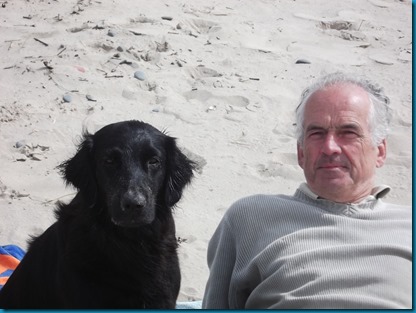 […] them and he said, “You should go to Wrag Barn. They are very dog friendly.” Then, talking to Adam Ruck, he cited Wrag Barn as one of his favourite courses to bring his dog. And, distinctively, the […]