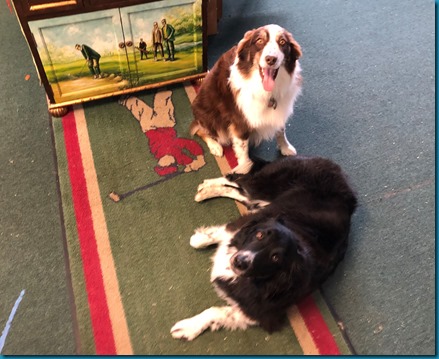 Happy New Year! Long time since I’ve checked in. Primarily because the English winter weather has descended making rounds hard to squeeze in between the gaps of rainfall and the shrinking daylight hours. Fortunately, we were able to juggle the various COVID controls and get ourselves to the USA to see family for the holidays. Lori’s family lives in North Carolina which is quite a popular golfing destination and we not only had plenty of courses to choose from, but warm and dry weather to play in!

One of our rounds was at the Southern Hills Golf Course in Danville, Virginia. When we arrived, we were greeted by a couple of charming canines (see photo above) and thought that we might just have stumbled on a rare dog-friendly course in America. Unfortunately, the friendly welcome was confined to the pro shop and dogs were not allowed to accompany players. But I did have a very friendly and informative chat with the proprietor about some of the distinctly American challenges to welcoming dogs so I thought that I would share them here: